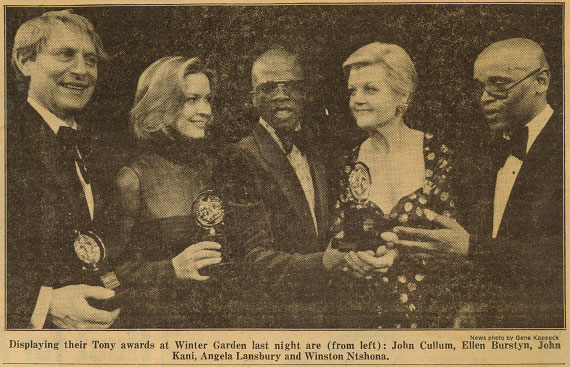 Ellen Burstyn of Hollywood and Broadway became queen of both show biz capitals last night when she pulled down the 29th annual Tony as leading lady in a play for her role in the comedy “Same Time, Next Year.”

The award for best actor in a play went to the South African team of John Kani and Winston Ntshona.

Broadway’s astonishing black musical, “The Wiz,” captured the best-musical award and six others to become the second black musical in a row to win that Tony, in 1974, it was “Raisin.” The 1975 award for best play went to “Equus.” Other top awards went to: Best actress and best actor in a musical, to Angela Lansbury of “Gypsy” and John Cullum of “Shenandoah”.” Best supporting actress and actor in a play, to Rita Moreno of “The Ritz” and Frank Langella of “Seascape.” Best supporting actress and actor, in a musical, Dee Dee Bridgewater and Ted Ross, both of “The Wiz.”

“The Wiz” also claimed the awards for best score, by Charlie Smalls; best choreography, by George Faison, and best director of a musical and best costume designer, both Geoffrey Holder. Best director of a play went to John Dexter of “Equus,” James Lee Barrett of “Shenandoah” won for the best book for a musical and Carl Thomas of “Sherlock Holmes’ for best scenic designer. To a valley of applause at the Winter Garden, Burstyn alluded to her win of an Oscar earlier this month for her role in “Alice Doesn’t Live Here Anymore”: “I guess this is what it means to be twice blessed.” “But the show is really a duet,” she added. I’d like to accept this in the name of Charles Grodin, my magnificent partner.”

The Winter Garden, on Broadway between 50th and 51st Sts., one of the oldest and biggest in our town, was crowded as show biz greats ranging back to venerable Joe Smith, at 91 the surviving member of 1919’s Smith & Dale comedy team put on a nostalgic show for a glittering audience. The awards program moved swiftly, the presentations interspersed with homage to the Winter Garden itself and its record of hits since it opened its doors on March 20, 1911. It was Broadway’s biggest night of the year, and the Tony kept to its tradition of presenting a selection of old goodies, from dance routines, straw-hat-and -derby comic bits, medleys of old song hits and a dance team from 1971’s “Follies,” with Alexis Smith. Old Joe Smith gave the medallion to Miss Moreno, who wore a slinky gown and tan turban. In a fast quip, Miss Moreno said: “Rita Moreno is thrilled.”

Former Mayor Lindsay joined Angela Lansbury for the final steps of a production number from 1966’s “Mame,” then presented the best-director award to Dexter. All through the evening, the award winners had solemnly thanked “those who voted for me, and those who did not.” After Dexter got his award, Lindsay said: “And I thank all those who voted for me. And all those who did not.” Fred Astaire, who appeared at the Winter Garden in 1918, was heard by tape from Hollywood as he announced the Tony to Miss Bridgewater.

Milton Berle, a veteran of the “Ziegfeld Follies,” warned: “Don’t applaud too loud. This is an old building!” Kani and Ntshona who are not even recognized as actors in their own South Africa made the briefest statements of the night. “Thank you very much,” led off Ntshona. “Thanks, said Kani. When producer Kermit Bloomgarden accepted his award for “Equus,” he noted that fellow producers were in the audience and said: “I’d like to see us find a way to give these awards without competition.”